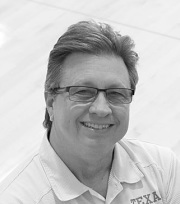 Born in 1957 in Houston, Texas, Steve Willgren was raised in Austin, Texas, where he still lives.

After graduating from high school in 1975, Steve attended the University of Texas and received a BFA in Fine Art in 1981. Steve worked as an art teacher while continuing to paint and exhibit his work in small art festivals around central. After a few years, Steve put aside his brushes and began a career as a professional graphic designer. After 30 years of designing brochures, ads, newsletters and web sites, he decided he needed go back to his creative roots and start painting again. Years of working on the computer became very limiting and confining so he decided to work in a bold, colorful technique.  Southwestern artists, John Nieto and Jeff Ham’s dynamic style and bold colors are big influences.